John Jordan (UK) is dedicating his life to transforming our world by combining art and activism. His traits of rebellion can be seen at the ZAD (an autonomous self-sufficient commune that prevented new airport), Reclaim the Streets or the Clown Army. Together with Isabelle Fremeaux he leads the Laboratory of Insurrectionary Imagination.In March 2020 John visited Graz and took a walk with us around the city center. While we introduced him to some of our city’s controversial matters, he shared his own international experiences with us.

On Civil Disobedience. At Forum Stadtpark.

In 2017 a congress about civil disobedience took place at our so called city hall of the hearts. At the same time there was an incident of vandalism somewhere else in the city. Our vice mayer Mario Eustacchio drew a connection between these two events: „Behind the harmless-sounding term civil disobedience is actually a call to violence.” Forum Stadtpark distanced itself from violent acts and acts of property damage. Eustacchio proposed to replace the critical institution by a city café.

On snowball fights against bankers. At Karmeliterplatz.

In 2009 after the financial crash John Jordan took part in the action “The people vs. the Banksters snowball fight” in London. 40 people gathered in front of the Oil and Gas Bank and challenged the workers, whom they accused of harmful acts against humans and environment, to a snow ball fight.

The once common space „Pfauengarten“ was sold off to private investors. Extremely expensive luxury apartments were build there in the core zone of the UNESCO World Heritage Site . Apart from criticism regarding the architecture itself – to many citizens a deterioration of the cityscape – this project lead to prostest on a social level. Among other things, the influence of apartment owners on the public park life was (and is still) criticized. Gentrification is feared as a result and leads to the question: Whom belongs the city to? 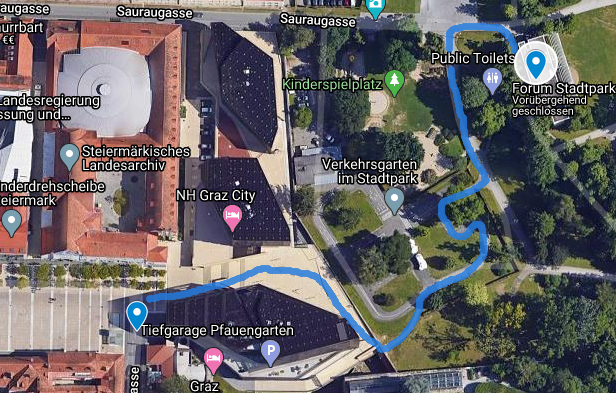